Skip to content
I spent the majority of yesterday in Jefferson City with a group of 5-8 grade kids showing them how I use pastels. 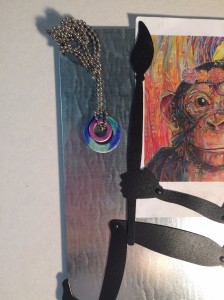 I think it went well. At first I fielded 20 or more questions ranging from “what’s my style” to “whom did I vote for”. O.o So some questions were more thought provoking than others. The final question was “can we get started?” LOL!
So we got to work! They chose their own reference and used a grid to get the lines in place. Then it kinda got wild as everyone had their own pace. Some barely finished one while others did two or three. These were 5×7″ pieces. One thing they all shared was a very critical eye of their steps. Their teacher (and my husband) says this is part of that age. Though I think some of us, myself included, never get out of it… judging the steps as if they were the final piece.
I tried not to bring too much but enough to give them an idea of what I do… a couple full sized framed pieces, one older (Diligence) and one newer (Backlit Berries), several daily paintings, my current sketchbook (should have brought the old one too!) and my pastels. Those DIY’d canvas organizers with a carboard cover worked very well! I think the only thing they’re missing is a foam insert to keep them from shifting side-to-side.
Before I knew it, it was time to leave. I was exhausted! The picture above shows a gift I received. One student had showed them to me before or during (I can’t remember now) the 5 hours I was there. As I was leaving, she offered me one. Yep, I teared up. Such a sweet gesture and treasued momento! So it will be proudly displayed on my inspiration board… when I’m not wearing it.

This site uses Akismet to reduce spam. Learn how your comment data is processed.